An early start as we had to get Stevie down for the 8am bus from St Girons. So 6.20am alarm was a rude awakening for us all.

Stevie and I trundled off with the trailer to St Girons while Al started work. He managed to finish the holes in the back wall and do a little bit in the bathroom before Hans arrived and then they set to with the 2nd Sky Light. 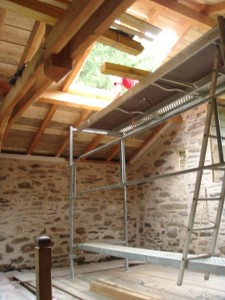 We left the mountains in glorious sunshine and by the time we got to Seix it was torrential rain. I dropped Stevie and the bus pulled up just as we got there. Then a quick trip to Le Forgue to collect lime and cement. My route was planned around not having to reverse Vinnie having the trailer with me.

Next was collecting a load of sand. Surtra garage was open on the way back so I popped in to see what was happening with the order for the new exhaust. Not good news the silencer bit also needs replacing, ouch far too much money but we have to do it. Hoping to get it done before we leave but we will see.

A big shop at Carrefour to see us through till we leave and then back to the barn. Through all the rain the last thing I expected to see was the boys on the roof but Salau had no rain and for once better in the hills than down the valley.

I unpacked the van and then asked Al to help as a bolt had become loose on the the trailer and I was unable to lift it. Very luckily it had not bounced off as the safety chain had been snapped in the process. It needs a once over before we use it again for sure.

Replenished the coffee supplies so made some coffee for everyone.

Hans and Al continued with the sky light and made super speedy progress. The place is totally transformed. Really looks like a home now rather than a barn. Well at least upstairs does!!!!

Al mixed a load for me and I cracked on with the bathroom pointing. By lunchtime the load was done and the window was looking great. They only had the slates to put back on after lunch. They were 1.5 hours quicker than yesterday knowing exactly what to do and they work really well together which is great.

Hans managed to locate the leakage on the roof, at least we hope so, so with a little luck we are watertight again. No Stevie to help with lifting the heavy window up today so Al rigged a simple pulley which made life really easy and number 2 is in place. It looks BRILLIANT.

We had a quick tidy up and shifted the scaff for tomorrow’s work and Hans left at 5pm. Al and I quickly brushed back the bathroom walls and were done by 6pm. Looked at sorting out the other 2 main windows as well. We may well be able to re use a window velux reclaimed by Al for downstairs which would be good if that works, just need to re jig things a bit though if we do that.

Fizzy water and sitting on the window ledge at the gable end admiring how great it looks, hoorah.

We were both exhausted, me more than Al. So it was a very leisurely night. Trout and veggies for supper then bed and a book by 930pm and asleep by 10pm!!!! BLISS