Roof outside and in

Another morning of wall to wall blue sky. After breakfast and a quick internet bout to sort out emails Breezy headed off down the valley to make a couple of phone calls while I potted some plants then got up on the roof before the slates got too hot to touch.

The torrential downpour and thunder storm revealed a couple of imperfections in the waterproofness of the roof. I have got the stage where I hate getting up there as trying to establish where the water is getting in is a bit like trying to pin the tail on a donkey. This time however I was rather pleased with myself. Having identified the leaky area I touched a small slate near the ridge and a load of water gushed out. After a bit of fettling and a quantity of mastic I am fairly confident that the problem is fixed.

The second leak, though not as spectacular was also fairly easy to fix.

Breezy got back having bumped into half the village for chats and sowed the parsley seeds we had been soaking. She had run into Fernandez who is repairing the piste between us and the village after there was a land slide while we were in Cuba. This involves blasting the rock face and also building a massive retaining wall between the piste and the river. Apparently there is a good chance the piste will close for a few days next month while the work is carried out.

A salad lunch after wrestling with insulation inside and in the afternoon we set about making the first of 3 frames for the Velux windows we fitted last year.

Beers down at the Auberge where we caught up with Rene and Anouk’s news. Clive turned up and so we have an invite to supper on Monday. Jean Claude (our neighbour) and the Mayor showed up as well.

Fantastic dinner of Barbecued marinated duck breast, spicy noodles and fresh broccoli out of the garden. 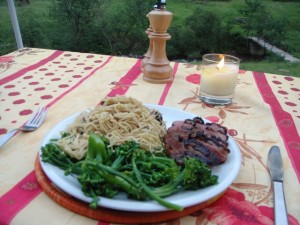