Another grey day but it is the 14th.

After an early start we set off for Salau about half 8. Having dropped off rubbish and recycling, first port of call was the Auberge to find out what Rene & Anouk wanted help with for the Commune meal. Then up to Raymond’s house for his “vide grenier” or attic clear out. His house is on the market and he has a huge amount of stuff to get shot of. Alison also had a car load of stuff for sale. Breezy picked up a book and DVD and I was very restrained and only came away with a couple of folding chairs and a foot stool. There is a great advantage in having a limited amount of liveable space as it does restrict how much stuff you can put in it.

We had time for a coffee at Raymond’s and a few phone calls before starting helping with the meal at the Auberge. 45 people for a 5 course lunch for Bastille Day; cooked by Dutch and served by Brits (us). It was great fun working with Rene & Anouk serving out and clearing up and will not have done us any harm in the community to be seen helping out.

On the way back the Mayor stopped us to thank us as we drove past. He also mentioned about the platform in the trees which caused him quite a bit of concern when he found it over the winter. His immediate thought was that the hunters had built it to shoot from which is highly illegal. Once he found out it was us he was less concerned and was laughing about it with us. We apologised profusely.

Breezy managed to slip into the conversation the windows we want to open up in the barn and check that we are still OK to go ahead.  That is still OK so we can start planning all the materials etc.

Back to the barn for bread and cheese, a nap and a read before heading back down to the village for the meal at the “Maison de Chase”. This time we were invited. Patrick had organised a dinner for the celebration with the notion that it would be about a dozen people. In the end it was over 60. It was a great atmosphere and we have made some new acquaintances. Must get the note book out and write down everyone’s names. 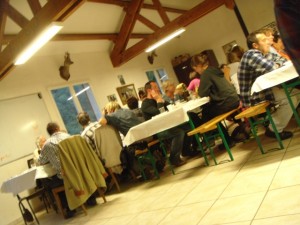 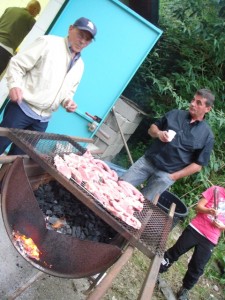