Organisation and Paella night in the Village

We were not in a major rush to get up as both quite tired. After very healthy brekkys of lots of fruit and yoghurt we came up with a plan of attack to get everything up and running by lunchtime.

Long list, in short  toilet compost shifted to flower beds so toilet is now ready for use again! weeding of veggie beds and planting of lots of good salad stuff and veggies for the summer ahead, outside furniture out, outdoor shower and washing up area sorted,  satelite dish up and running, solar panels plugged in, water butts sorted without leaking taps and then even time for lunch in the sun on the top terrace.

After lunch we did a bit more weeding, Al did some strimming around the path areas and back terrace and before we knew it it was time for a very chilly outdoor shower as the wind was really blowing and it was not a warm wind!!!

We headed off down to the village for supper as there were 40 Harley Bikers staying in the village for the week end and the village had laid on a paella night for villagers and them in the tent next to the church. We were all wrapped up warm as it was far from warm!!!

Food wise we had an interesting starter, a 3 layer fish crepe (cold) with tuna, salmon and crab sticks, followed by paella which was excellent and then apple tart. The sing song began as they had an 80 year old chap on his squeeze box, dressed in clogs playing the music. He was good and got  everyone going. So much so that the bikers started swinging on the benches and got carried away. 4 of them literally did unintentional back flips into the tent. It was very amusing until we realised they were all 70 odd, anyway no injuries and recovered quickly with a few more glasses of the local plonk. 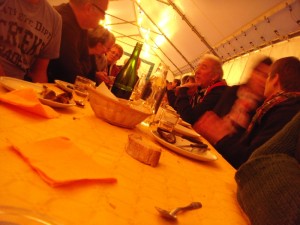 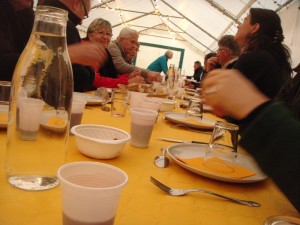 We left them to it at around midnight. Good to catch upmwith Alison and Peter again and also to see Daniella and Patrick too.