This is the first time since we have had the place in the Pyrenees that it has rained on Breezy’s Birthday. Undeterred by the weather we prepared for a short hike up to Cirque d’Anglade to get some fresh air after breakfast. Charlie wanted to take us both out to lunch so we also took some dry clothes in the expectation of being fairly wet after the walk.

Initially on the walk the forest provided some protection from the precipitation. It did not take long however for the rain to permeate the canopy and where outside the wood it was heavy drizzle, under the trees it was fat drops of water. Once the Cirque was gained we were inside the cloud and we had to get within 30′ of the cascade to be able to see it. And even then we could only see the bottom 30′. There were some rather nice cows though, and fortunately Charlie likes cows. 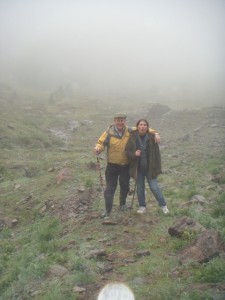 The descent back down to the van at the mines took considerably less time than the walk up. Dry clothes were donned and we set off to Seix for lunch.

Had a fantastic lunch at the Gourmandie before heading back to the barn with a short stop to view the church in Salau. We all had a siesta for half an hour before thinking about more food and alcohol. 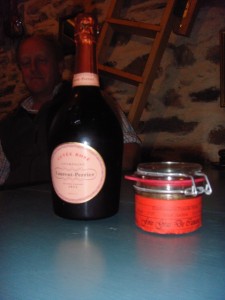 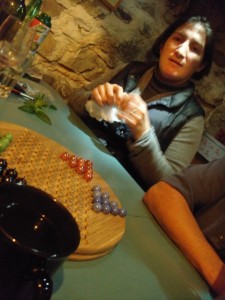