One of the things we had wanted to do this year was use the little tent and go and do some explores with it. So Saturday and Sunday the forecast was for yet more sunshine. I am totally loving this sun sun sun! So we decided we would go for 2 days away and an over night camp. Got some ideas from Lee and made some plans after perusing over maps. We wanted a couple of hours walk in on the first day and then do a peak or 2 the next day, plus a good place to camp. 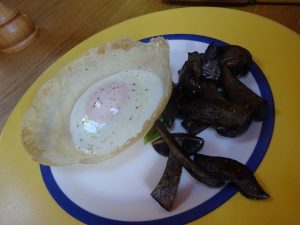 We decided to go up to just beyond Guzet the ski area and park and then start from there.

We trundled up the Turguilla Valley past a few lakes before finding the most gorgeous camping spot at Etang de Reglisse at the far end of the lake, view resembling that of an infinity swimming pool.

It was a hot climb up so I was tempted with a swim and it was definitely warmer than the river.

We set up camp, chatted, played cards, did crosswords and took lots of photos of the stunning area and the sunset. Very romantic setting and no wind so we sat in shorts and T shirts till the sun went down at 845pm! Fuelled with Westler Ration packs which worked a treat hassle free.

The nights kip was fitful with lots of animal noises close by!

We woke to glorious sunshine yet again and had brekky by the lake before packing up and heading up to the Spanish border. 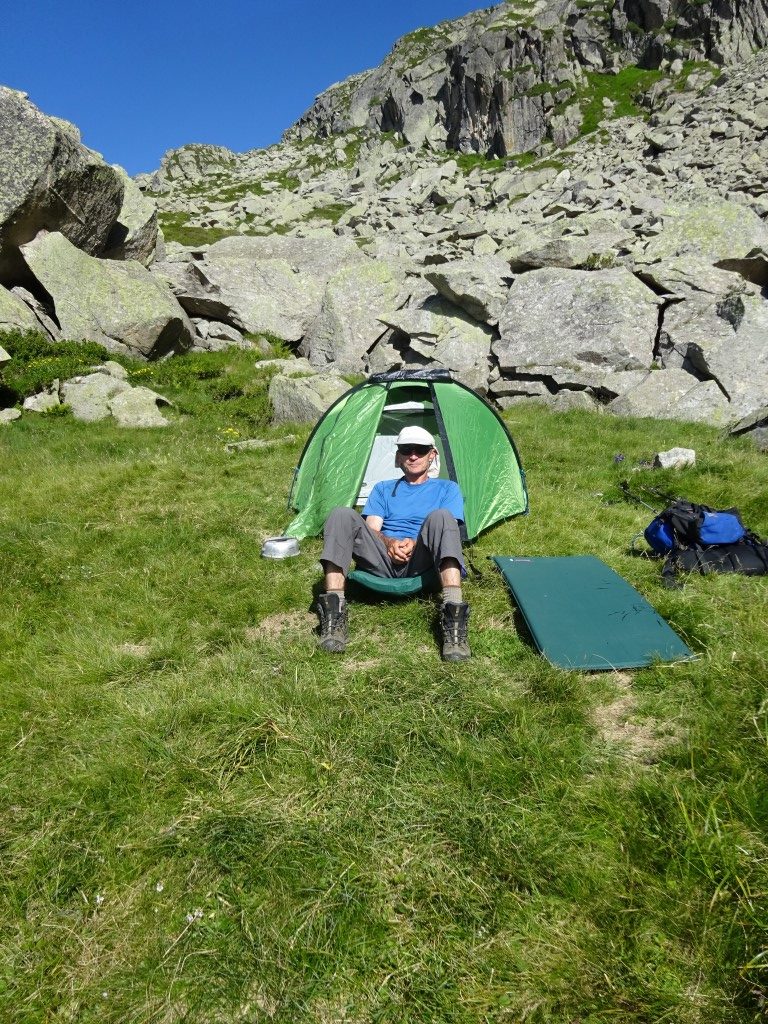 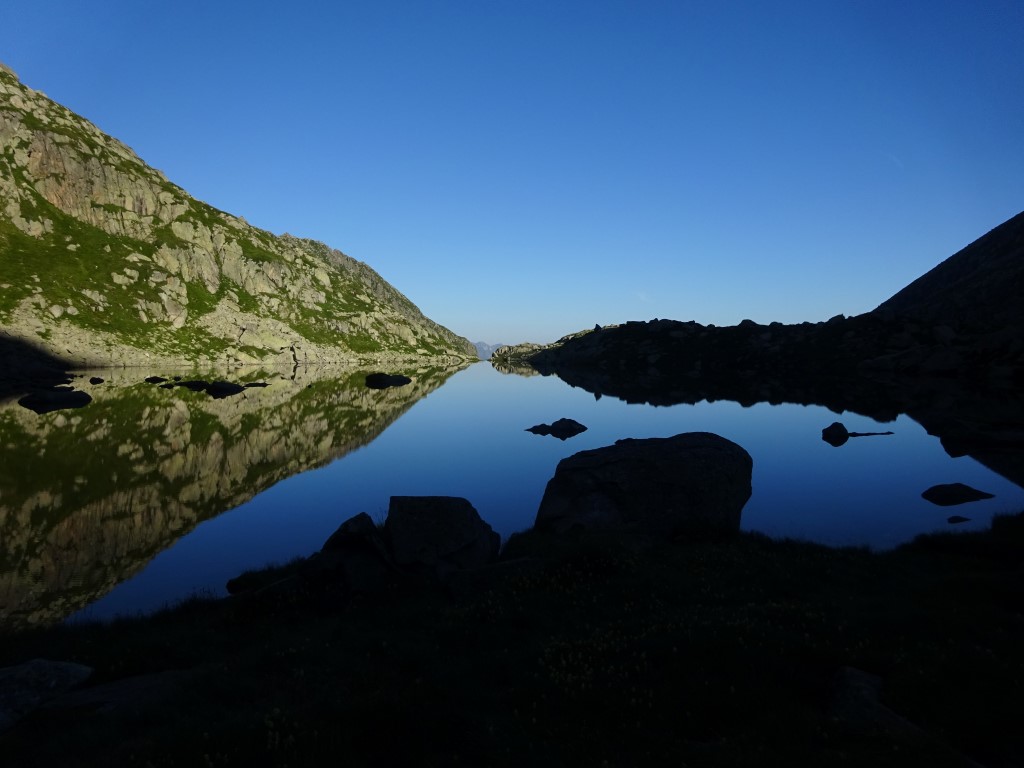 Early morning at the camp spot 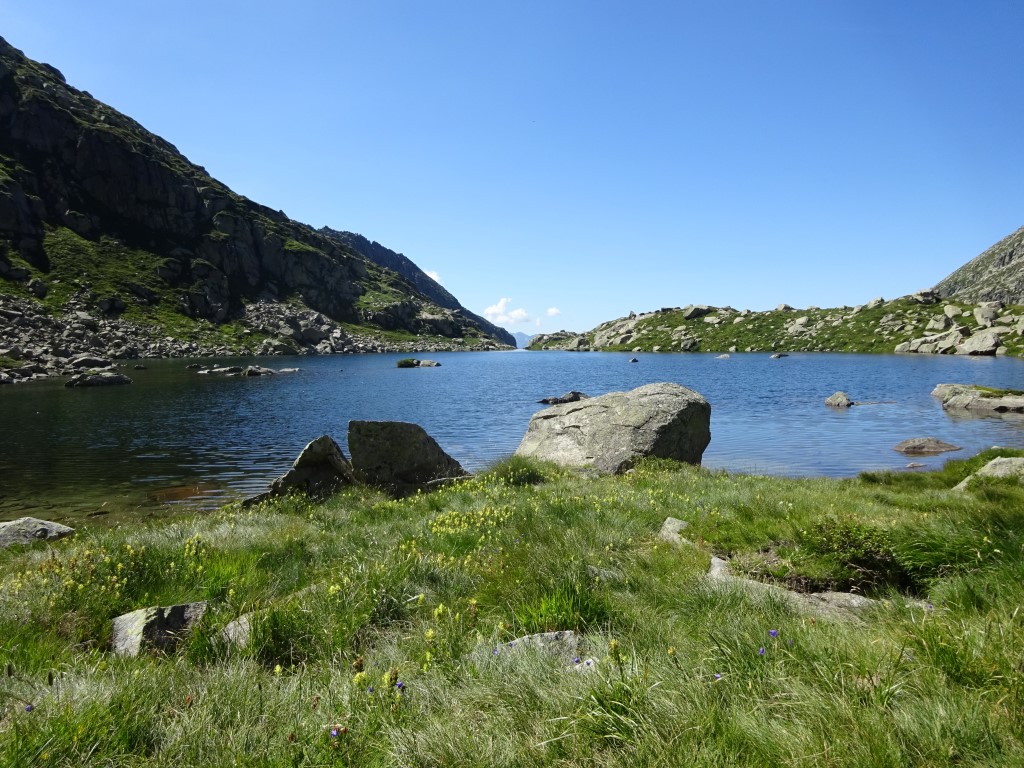 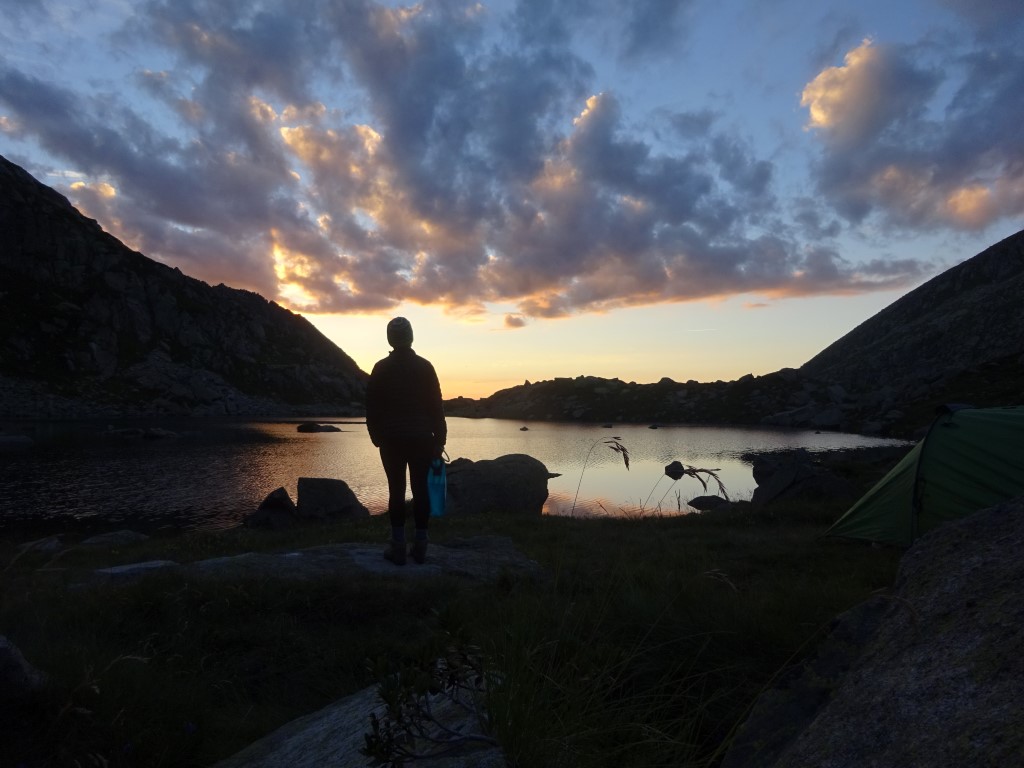 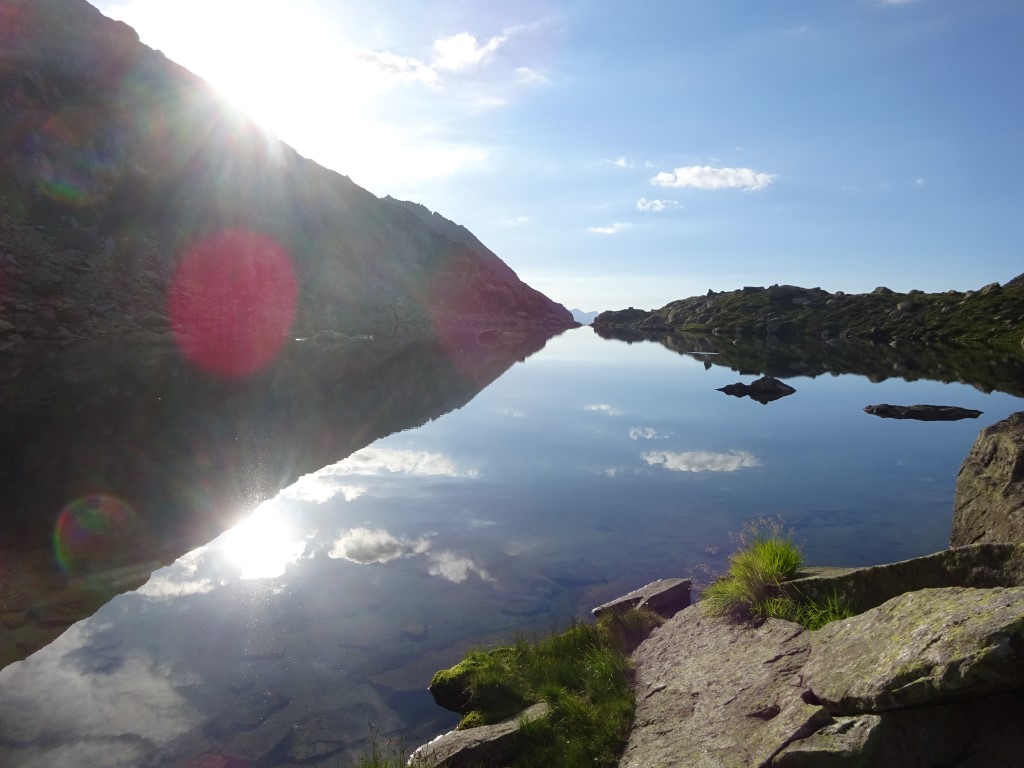 On arrival at the camp spot 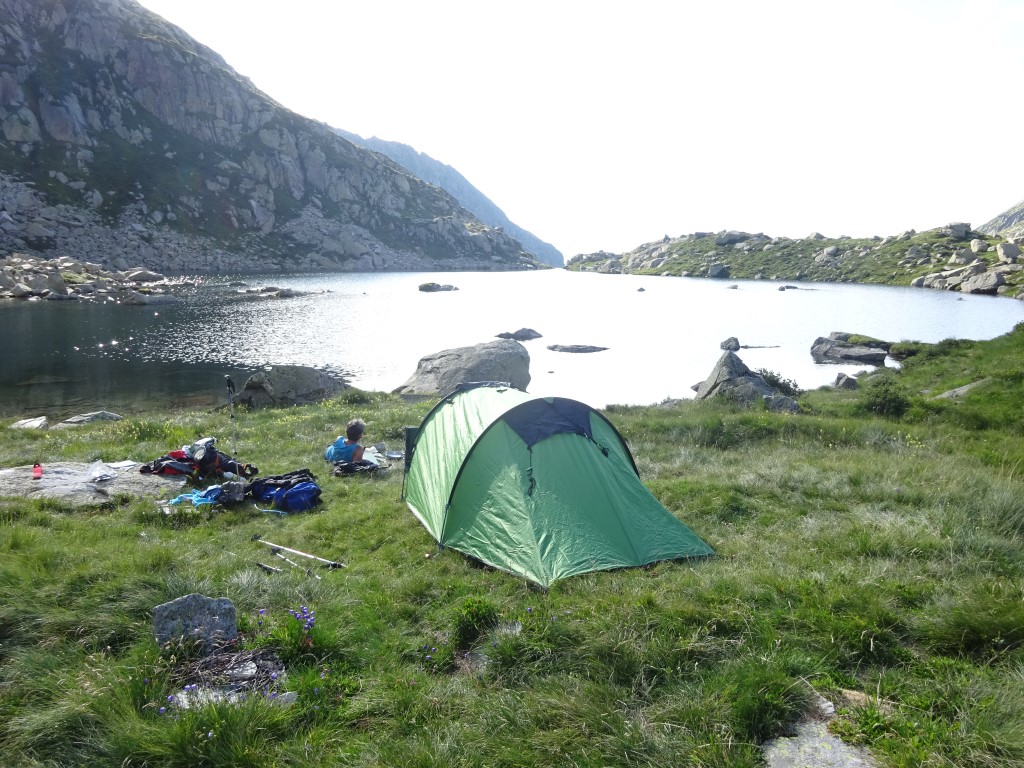 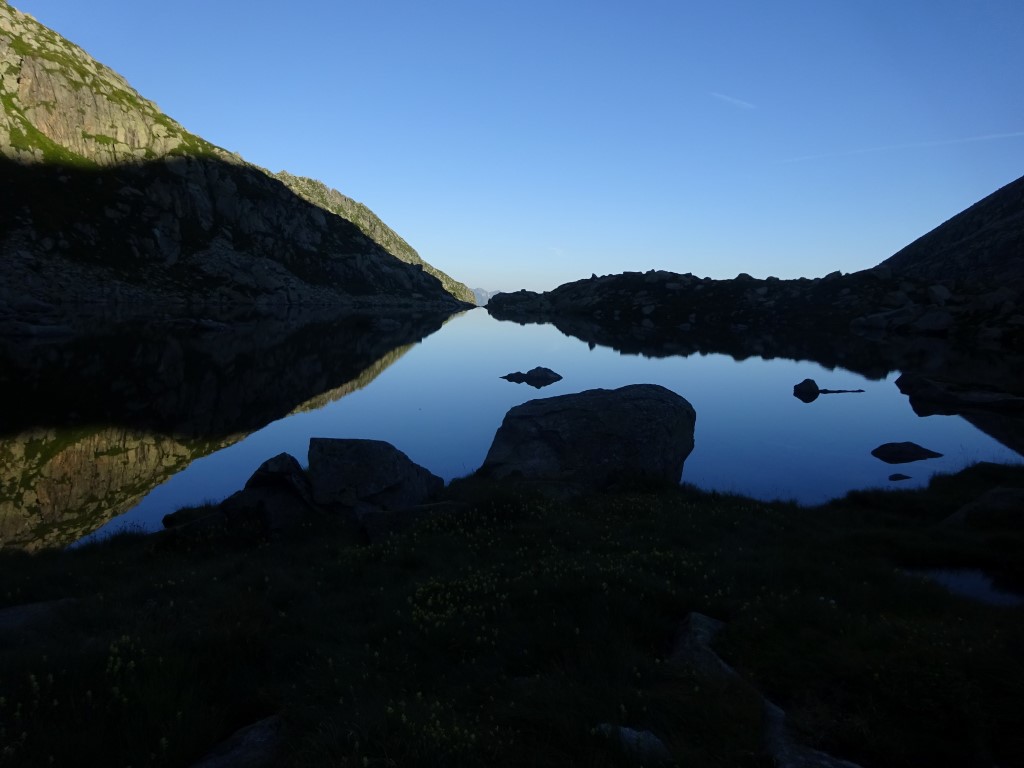 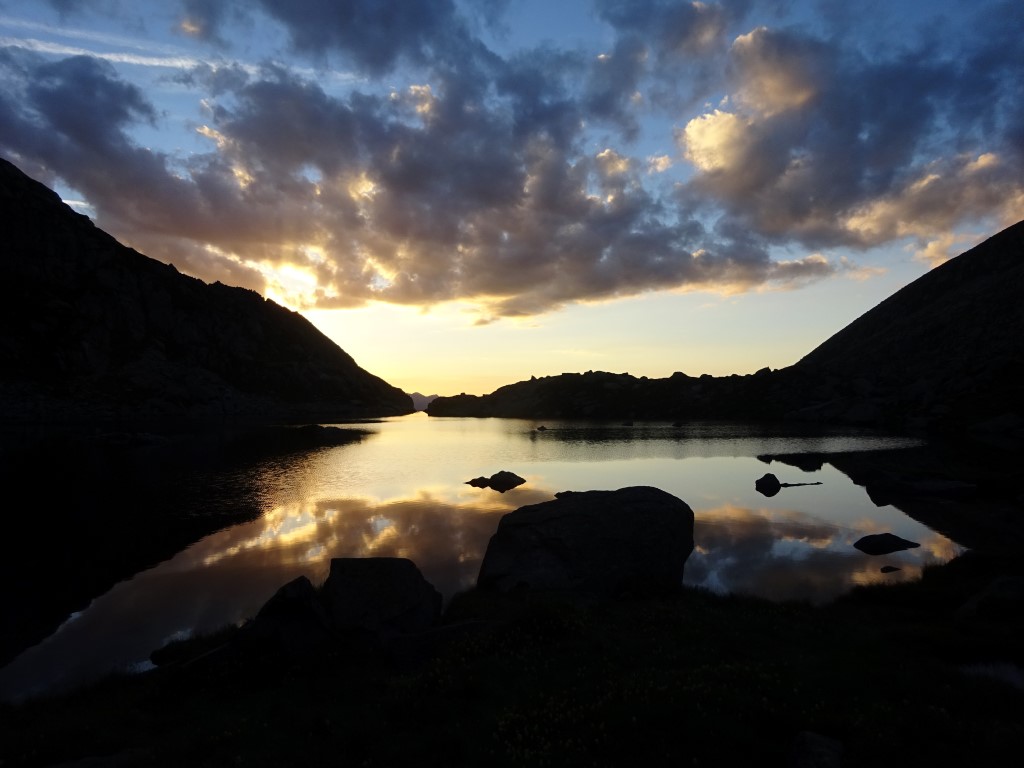 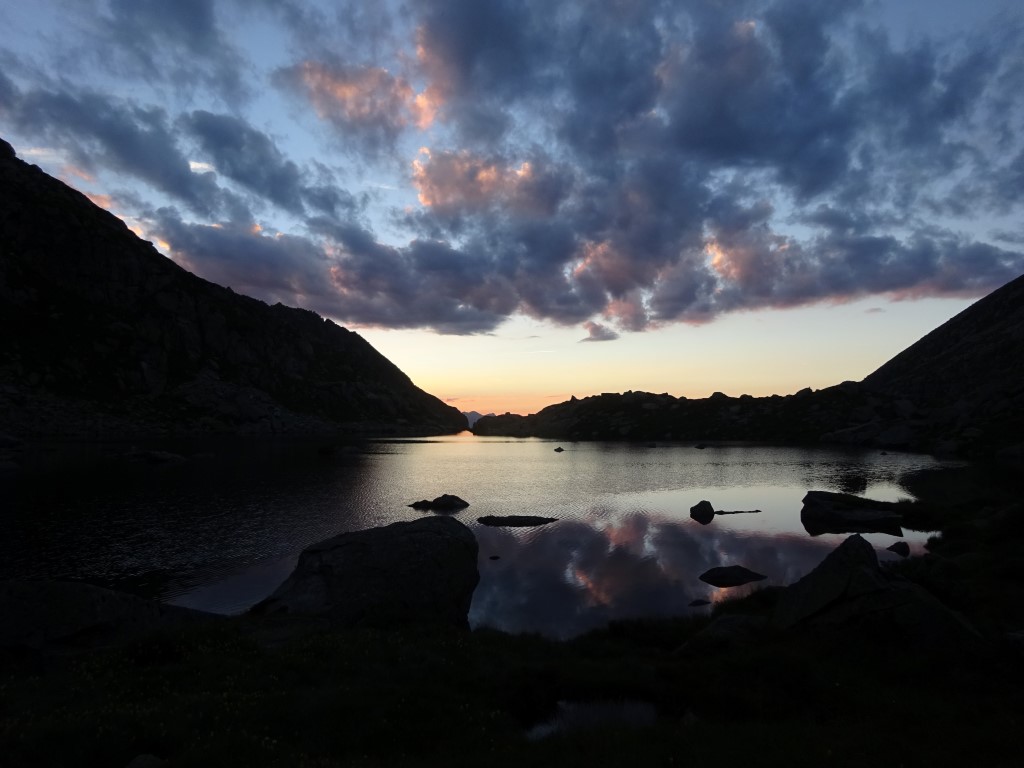 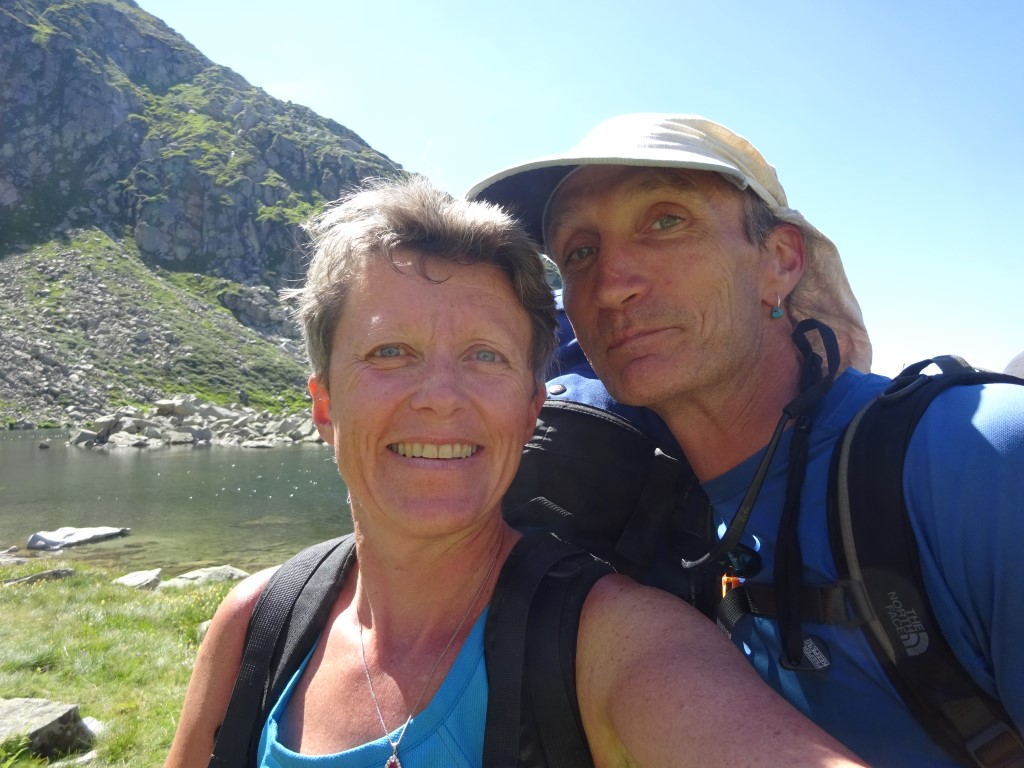 Plan was to climb Pic de Turguilla and then follow the ridge line back to Pic de Seron before looping back down to Billy Boy.

A nice hike up to Pic de Turguilla and great views of Pointe de Rabassere too, another one to do another time. Looking over into Spain and once again trying to piece together the skyline. We then descended steadily down following the ridge initially before finding our own way rock hopping up to the col and finally up to Pic de Seron. A lot of boulder hopping.

Lunch at the top no wind and great views.

Lee who has climbed most of the peaks around this area had mentioned that there was a way off the top to the north so we decided to try and do this to make it a loop rather than back tracking. Lots of boulders initially, then onto slippy grass and more rocks, following the cairns made lie slightly easier. Steep descent and hard going on the knees but it brought us back to the van in 1.5 hours from the top and made a lovely end to our little wild camping trip.

Totally lucked out with the weather it was perfecto. 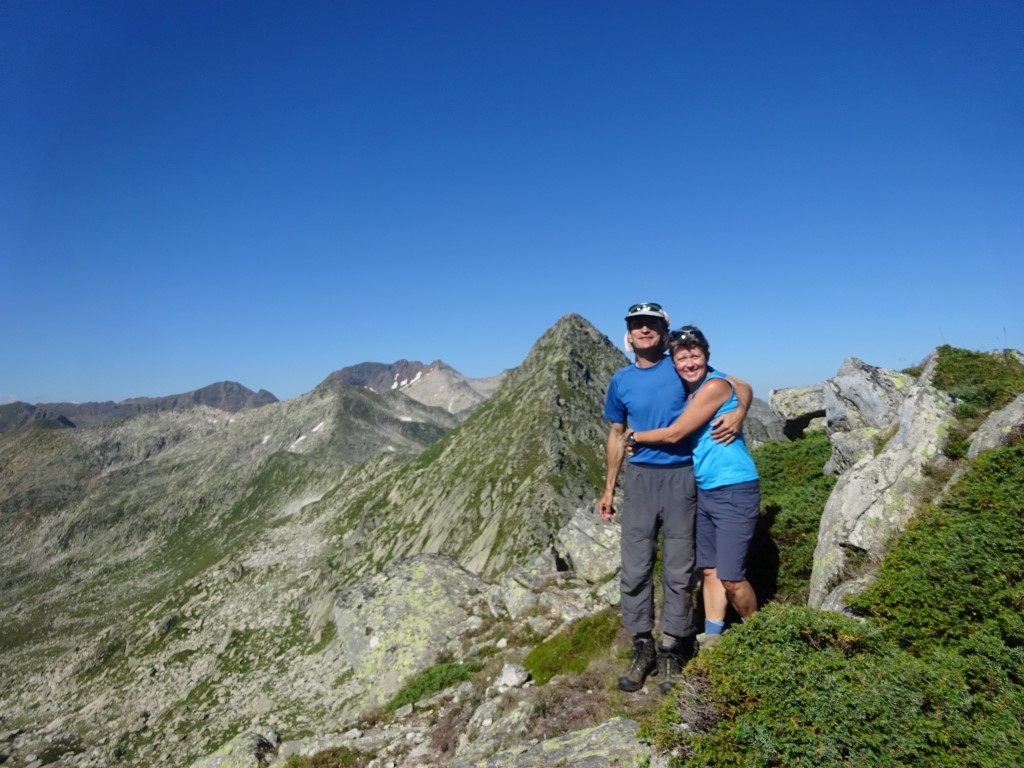 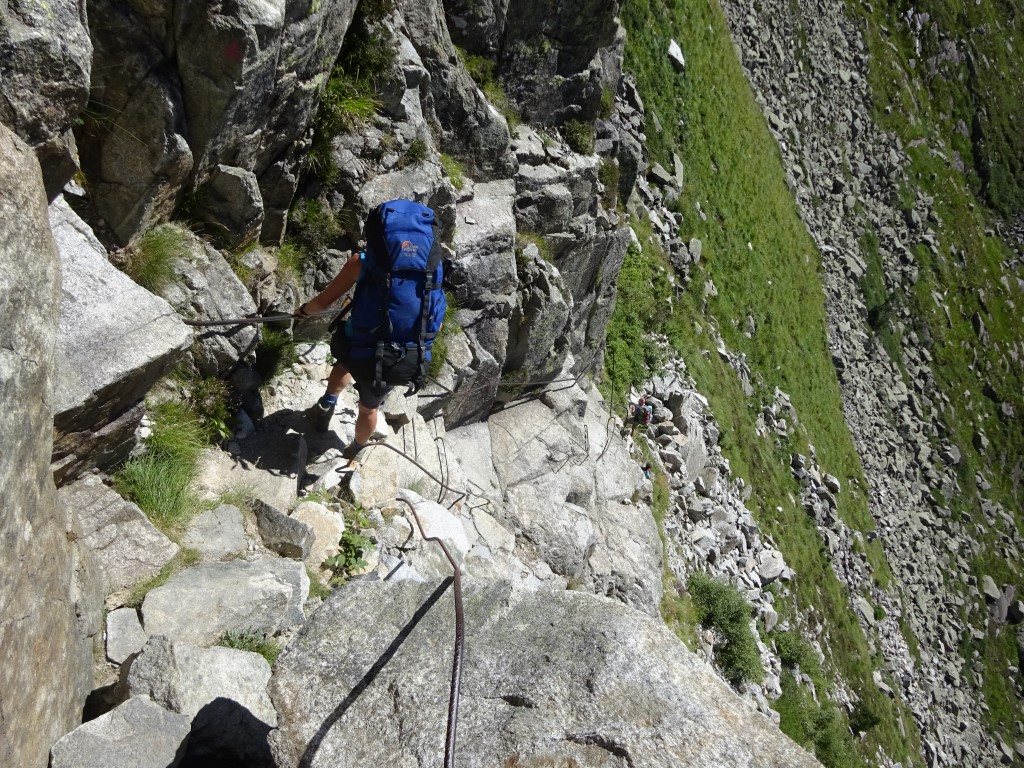 Breezy on the ladders 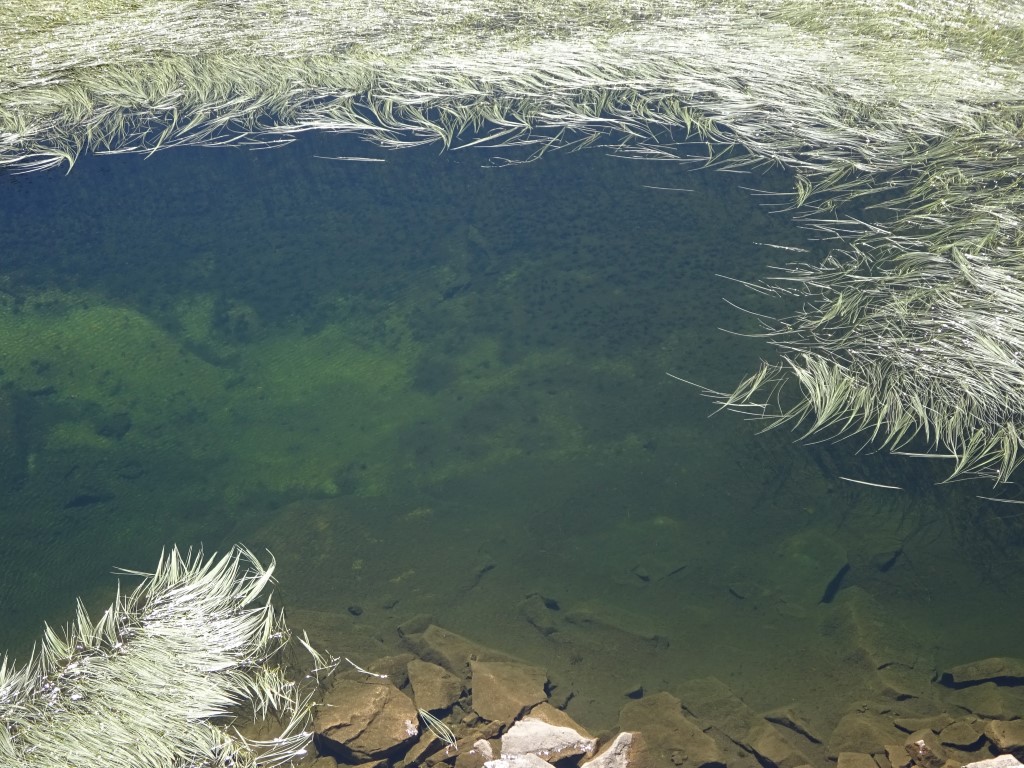 Weeds in the lake

On top of Pic de Seron

Spain on the left, France on the right 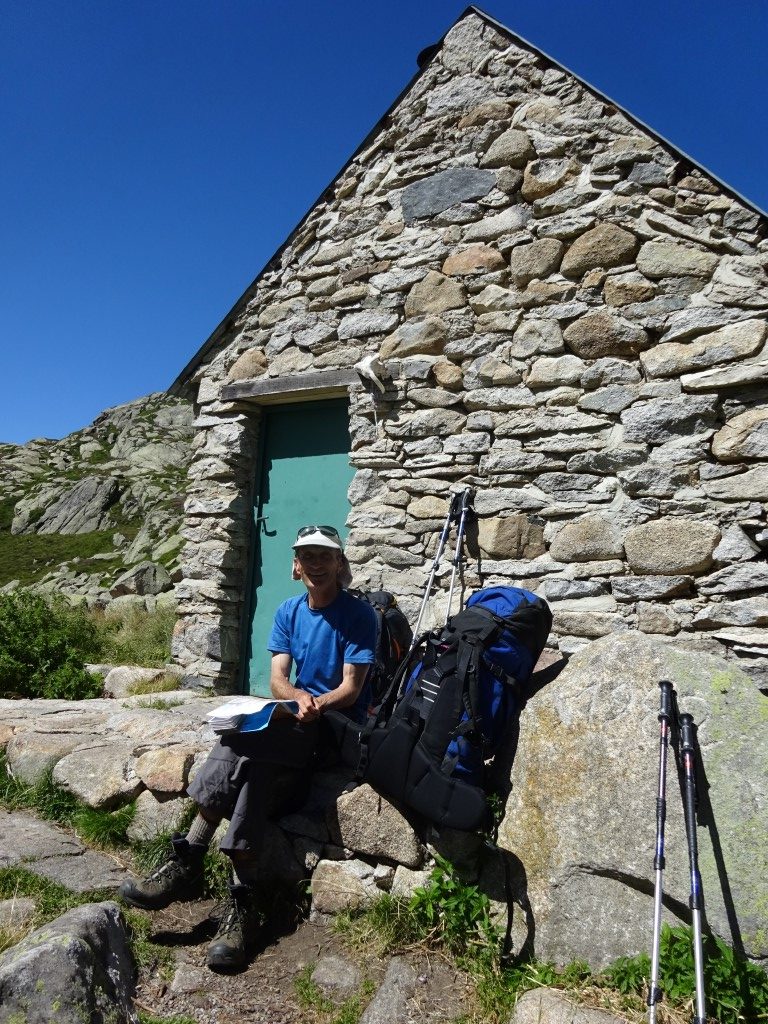 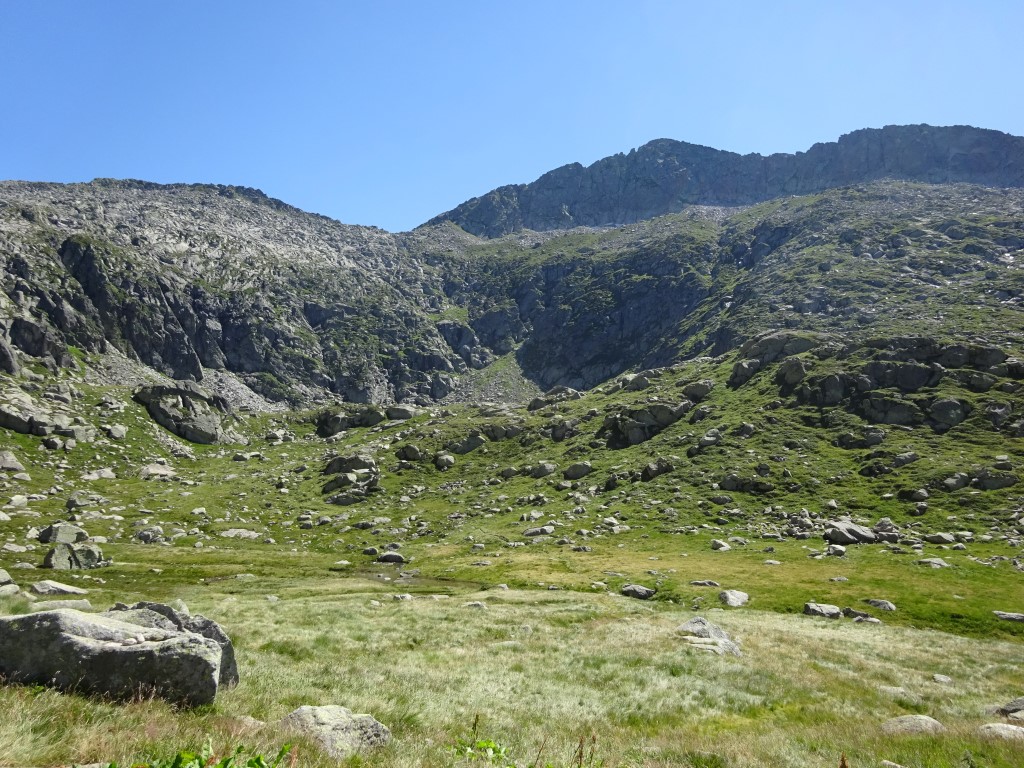 View from the refuge 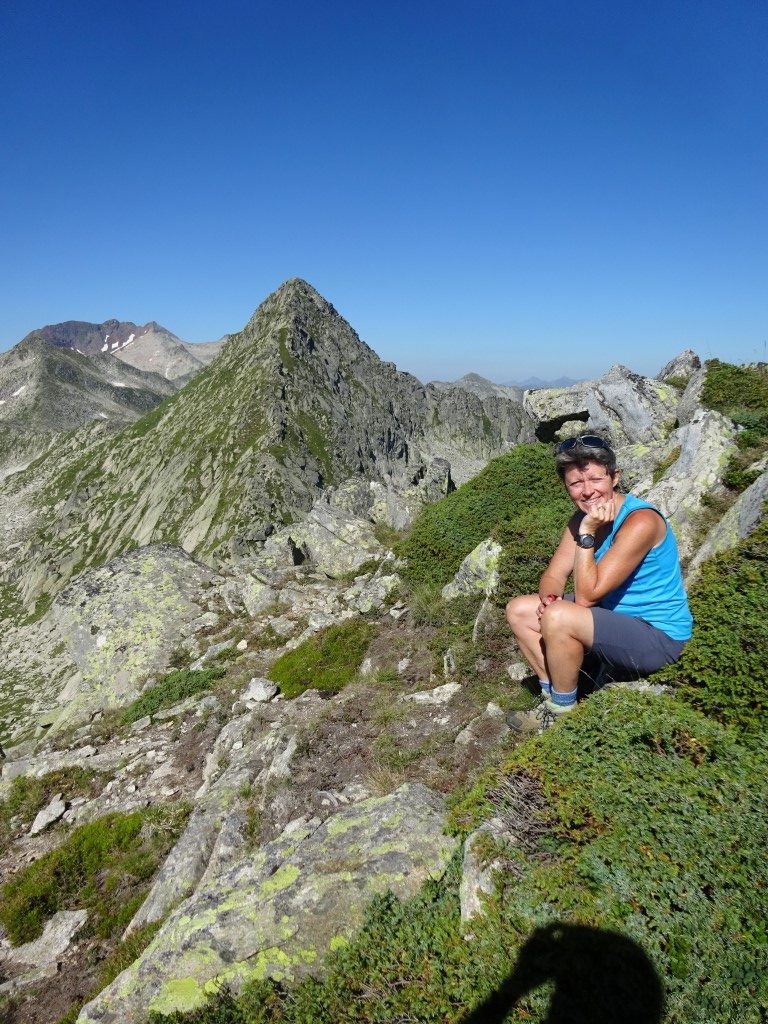