Another hot day. Clive arrived just after 9am and the boys set too. Mainly digging digging and more digging to get down to hard rock where they could dig a trench for the foundation.

Sadly me back still not great and digging is the worst thing for it so I cracked on with sanding the beams for the second bedroom, sanding down the plasterboarded wall for the cupaboard and then re plastering it. Also had time to sand the wood for the back wall frames of the second bedroom.

By midday the foundation was prepared, all that prep work of shifting rocks was well worth it as Clive did not expect to be at this stage until Tuesday so that is great. Clive went home for lunch and to get the mixer etc.

In the afternoon Clive mixed and Al scooped all the cement along the foundation of the wall before they both got the first layer of rocks in place. Cover up as storms are forecast and clean up and then beers on the terrace. Boys have done well. 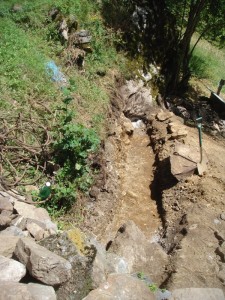 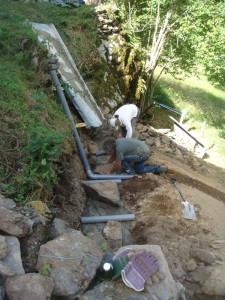 We had been asked for an apero from Didier and Vero who we have met at a couple of the recent fetes. We are never really sure what to expect. We arrived and a group of about 12 of the villagers arrived drinks came out, BBQ was laid, nibbles provided so aperos was slightly more than just that!. The bonfire was lit, table and benches arranged and pork spare ribs, merguez sausages cooking, cheeses and crepes inside as it started to rain. They are renovating a house at the end of the village so inside was in a building site but all good fun. Luckily not too late  and home by 11pm. A relaxing fun evening but the French was hard to understand with so much slang and so so quick.