As we have fresh bacon in the fridge (courtesy of Laney) we just had to have a fry up.

Although the sky was overcast it was still hot and humid.

Not made time to work on the web while we had visitors so made up a couple of hours in the morning and gonna have to do the same for a few days. Winter is fast approaching and enquiries are coming in for the chalet in Chamonix following the Olympics. At the same time we need to step up the marketing as people are definitely starting to think of their next break.

Before lunch we cleared the area inside the barn where we shall create another window opening. Moving stuff to create space for stuff that had to move to get more stuff in a smaller space sort of scenario. Once organised Breezy started treating the new beech work tops for the kitchen with Danish oil before lunch while I protected the decking with tarps and sheets of wood. Having turned the corner from barn to abode we are now turning it back into a building site.

Simple sandwich for lunch and then chair making again. 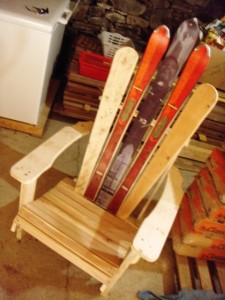 Planned to stop about 3pm for another bash at the web but I just wanted to finish the chair. Done at 5.30pm, we watered plants showered and prepared food. No peace for the wicked. Banana cake, salsa verde, bulgar salad, veg to BBQ and baby squid to marinate.

BBQ lit and veg cooked for tomorrow the the squid get toasted. 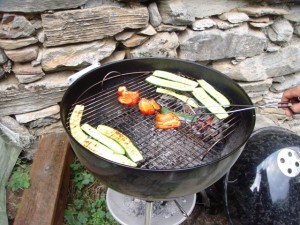 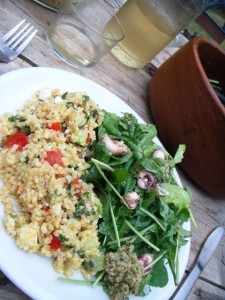