Solar day … or not

Sun shone through the front window of the outhouse this morning and we were optimistic enough to fill the solar shower bag with water. Breakfast included stewed rhubarb from the garden; our first home grown produce of the year (if you exclude the mint in yesterdays soup).

Outdoor chores while the weather permits included chainsawing wood to restock the log store by the outhouse followed by Breezy strimming while I repaired the outbuilding roof where we had lost a couple of slates over the winter. 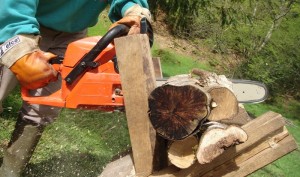 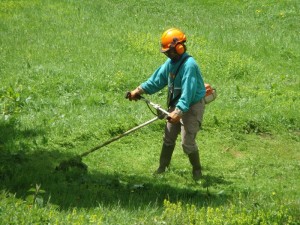 By lunchtime the sky was once again obscured by low cloud so our chicken salad was taken indoors.

After lunch we strolled down the piste to drop off a bag of rubbish in the bin by the car park. On the way back we stopped off to look at the avalanche debris where Olivier kept the donkeys. The slide got within a metre or so of the piste which is slightly alarming and there is still plenty of snow there.

The mizzle then started so we made a frame for the mange tout peas to climb up. Currently they are a mere inch tall but it is another tick off the list. Finished off raking up some of the grass out the back before sitting down with a cuppa and planning walls terraces and decking.

Outdoor shower in the drizzle.

Last nights Asian supper was fantastic though the plan for a BBQ tonight is going to change to bangers and mash indoors me thinks.