Well it was a disturbed night sleep. We had planned for an early night so tucked up in bed by10pm. By 11pm the sheep bells were getting closer and louder. I had a quick look outside with the torch and a couple of hundred sheep had got loose and were all over our land, trashing anything in sight. We both got up and rescued solar panels which was our main concern and decided nothing else to do till the morning.  Not much sleep as each sheep had a bell and what a noise they made, we were non too impressed.

So we were up when we heard the shepherds and it did not take long before the sheep dog had done his job and rounded them all up and headed them off down the piste. 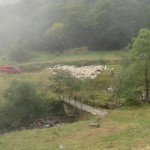 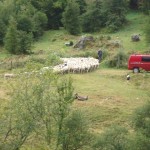 So breakfast time and then we had put aside the morning to finish once and for all the end of year accounts for Ski Breezy which took us till lunch time.

We had some curried courgette soup for lunch made from Alison and Peter’s large courgette and some apple and bramble cake for afters with their apples and our brambles delicious.

Fresh air needed so a quick forage no luck with the mushies but lots of brambles still.

Afternoon plan was to get the kitchen sink unit in place and plumbed in as such even though we have yet to get water into the barn!!!! Not too much faffing and the job was done and the skirting boards were trimmed to fit the wall too so all neat and tidy.

We had loads of boxes in the bathroom with kitchen stuff so in an attempt to make some space in there for when we leave we filled the kitchen units with pots, pans, plates etc etc. Beginning to feel like a home. Al dismantled one of the beds to make some more space too in the main living area.

It was then a quick heave ho to get the second fire plate in side and jobs done for the day. Just in time for hot showers before pork curry for dinner, a bit of a curry day!!!! ideal for a wet day like it has been here today though.