Another early start and another glorious day. Had a basic hut breakfast but lots of coffee for Al which is always the main thing! and we wer out the door at 745am and in the sun about 15 minutes later. It was lovely just being up high, early and in such glorious weather. We were really lucky to see 2 Chamois just 10 minutes from the hut. 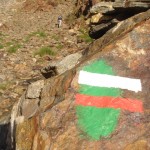 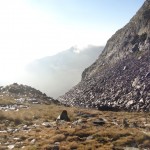 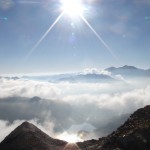 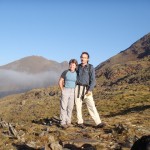 It was an easy 300m climb up to Col de Certascan at roughly 2500m where we met 2 local French guys and then a slightly steeper ascent up to the summit of Certascan 2853m, incredible views all around and again great to be able to piece together a bit more of the area down here. Great to be up at the top by 930am! but now only 18oom descent! 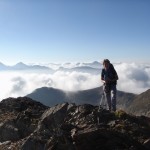 Let the challenges begin. We had chatted to the guardian of ridge options etc so knew the route towrds Tuc de Montabona was going to be quite tricky scrambling but weather was good and we felt like giving it a go. the 2 French guys and their lovely dog were heading off the same way initially. The first part was very loose rock and we really were very careful on hand and foot placement. The French guys knocked off some rocks and the speed the rocks went down and the distance made us even more sure footed. We kept our distance from them and opted to scramble around on the sunny side away from them so not to knock anything on to them either. Really good fun scrambling but not to be done in bad weather at all. It took us a couple of hours scrambling down. 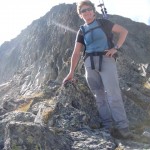 We could see Tuc de Montabona but that was beyond us from this angle without ropes so we skirted to the ridge to the right of the summit boulder hopping on huge granite boulders great grippy rock.

From the ridge we had options for the descent back down. We had found the cairned path towards Etang Hilette but we opted to make a full circuit skirting above Etang Alet and back to Vinnie. The path we did not find until 3/4 of the way along it or off it as such but we kept trundling at roughly the altitude where the path was and did find it in the end.  Again wonderful views which my words can’t describe at all. We had lunch at around 2pm just above the Cabane Lacarde.

The rest of the 2 hours down was not great, very steep and not a great path, our knees hurt!!!! We did find some bilberries on the way down so stopped for 20 mins to pick and make a tart with them but the knees were worse after that getting down. I think we were both happy when the last 2 hours were over, feet were out of boots and we had new clothes on!!!! A fabulous 2 days away batteries re charged and bodies suitably pooped!!!!

We stopped and caught up with Anouk and Jean Claude at the bar on the way home which was a nice finale.

It was then full on back at the barn, hot showers, brambles to pick, e mails to respond to, dinner to make, kit to unpack and fizz to eat with supper!!!! An even better way to end our mini break. We will sleep well tonight!