No Pujada but Ready to Paint

Enormous storms overnight and a huge amount of rain. We had set the alarm for 7am hoping to go up for the Pujada to the Port de Salau. Although there was blue sky about at 7, we logged on and the forecast was for rain at 2pm so we decided to do it another year as the thing was meant to go on till 3pm then a 2 hour walk back down again, in the rain was not appealing.

So after brekky we decided to get the barn into a state to be painted, no more dust after today was the plan.  We still had a fair bit of wood beams to sand down, half the ceiling needed it’s final sand, the wall where the new window now is needed pointing in and brushing down so yes the word dust was an under estimation!!!!

By lunch time the rain had come in so we were quite thankful we had opted out of the Pujada. We both resembled snowmen covered in white plaster dust and other dust and almost needed showers before we could have lunch!!!! but a quick wash had to suffice. We had the window pointed in,  all the wood sanded and only the final lower 1/4 left to sand and pointing to brush out!!! I do seem to use the word sand a lot…well we are a bit over the word and the job too now!!!!

After a delicious salad lunch with lots of goodies in which from an empty fridge was not bad! I did a quick trip down to Salau for water, rubbish and recycling. Al cracked on with the sanding and then I came back and finished brushing the pointed walls.

On my way down to Salau, huge works on the piste been done now resembles the M25 smooth as anything and on the way back I passed loads of very wet Pujada hikers on their way back to the cars. I was pleased to be in Vinnie as it was torrential rain and I got pretty drenched just getting up to the barn. Vinnie is really not sounding healthy some serious noise coming from the back wheel MUST get it looked at sooner rather than later.

By 5.50pm nearly drinks time we had got everything done, place swept up, tools away and even had a cheeky look at the colours of the paint since we had forgotten exactly what we had bought back in December!!! Bright is the name…exciting.

Rain coming down in large amounts so hot showers but quick ones and I think an early night and no alarm tomorrow, bring it on. 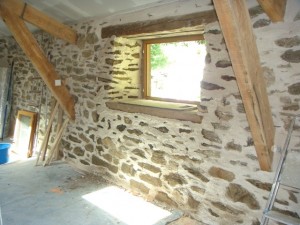 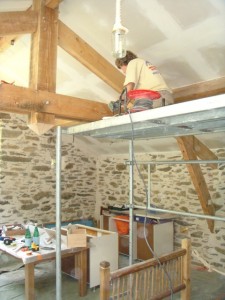