After being here 5 years I think. We have not yet managed to get out and about on our bikes and it has been on our agenda for a while. Anouk had kindly taken the time to print out some of her recces for us so we had a few to choose from.

We did a few hours of internet first, then brekky, made butties and headed off about 10.30am down to Seix.

I am slightly notorious for being over ambitious when it comes to days out and about and  iting off more than we can chew is quite normal. This could have been one of those days!!!

Anyway we parked up and headed off the agenda was 30km which does not sound too bad but the 1000m vertical climbing maybe was a bit too much considering neither of us are bike fit at all! Anyway, nothing ventured nothing gained….

It was pretty much 15km of up, up and up. Firstly it was great single track over completely new terrain for us and quite different barns in this area all the way up to Col de Catchaudegue all good fun and we felt fine. We then had a long traverse around Bourix hill on 4×4 track. The final 3.8km up to the summit felt more like 38km and we were both pleased to get to the top for lunch and to get off the saddles!!! Getting back on the saddle was not that much fun.  Al had to put up with me jumoing off my bike quite a few times with leg cramps not just in oine leg but both!!!! Luckily the weather was quite cool so it was great for MB.

WOW the descent made it all worth while. Crazy Ken would love it!!!! Single track through meadows then, into woodland, pretty much single track the whole way back down. Loved every bit of it and great to be back on the bikes. Drinks, stretching and then on to see Ian and Nina at their house just above Seix for a cuppa and a catch up. They have made great progress and the place really beginning to take shape. The yoga barn is an incredible space. 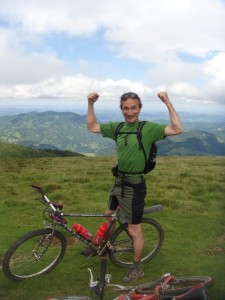 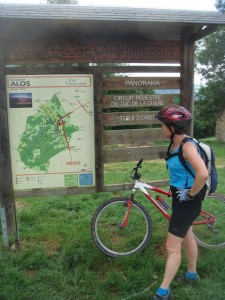 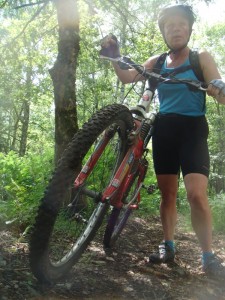 Late back to the barn at 745pm hot showers and then a new meal for dinner. I have been off carbs for a few weeks in an aim to reduce the number of Michelin tyres but tonight was an exception. Felt like we had earned it. Marinaded lamb with chinese 5 spices with a chinese sauce. Noodles stir fried with red peppers and mange toute and all tossed together with the lamb and ginger and peanut sauce twas quite different. Really enjoyed it. I dont think I would have it again by choice but Al said he would. We collapsed in front of a film, Hotel Marigold excellent fun and then to bed pleasantly pooped!!! 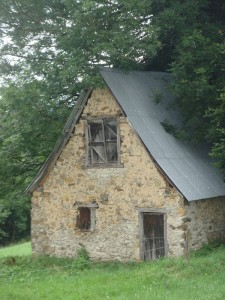