Fire on and Feet Up

No Alarm set this morning but still awake at a reasonable hour. A true Sunday morning breakfast of Egg Window. 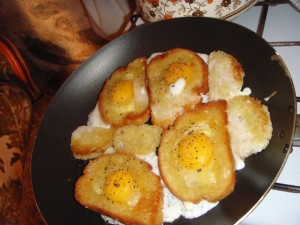 No big jobs to be done as we are well and truly out of materials and it is not worth starting anything new. Spent a bit of time planning what we want to get done and allocating person days to everything. It all seems manageable in the couple of months that we have along with walks and explores so that is great. Then we started a list of materials required and it looks like a trip to Toulouse is in order sooner rather than later.

After lunch we sowed some veg in one of the new beds so that we have some coming on when we are harvesting others. Also had a big clear up in the main barn sorting a sack of stuff to bin. Now that the skip has gone from between Salau and Couflens we shall have to be a bit more organised about putting odd bags in bins around the village more often rather than doing a skip run. It also means that booty from skip diving has ceased.

As it was Sunday and overcast we lit the fire and watched the DVD “Australia” with our feet up in the late afternoon. Had cheese on toast for tea; read a bit and retired early, ready for an early start to get more resources.

Sid the snake was again present most of the day. Having looked on the web I think he is an Adder or Northern Viper, the only poisonous snake about. Not sure if we should evict him or just ignore him? It should mean that won’t get ants nesting in the hot box while there is a resident snake I suppose. 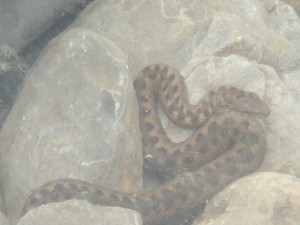