Curtains and a Coffee Table

It was dry first thing we finished the final bit of weeding in the veggie patch just in time before the mizzle arrived. Picked some rhubarb and got that cooking on the wood burning stove which is on all day.  Plenty of indoor jobs to do though so not too fussed.

Scotty had very kindly given us some curtains she had replaced so very luckily they fitted perfectly to the large main window and by chance the colour matches the sofa!!! We made a quick curtain rail before hanging the curtains. They look great, thanks Scotty. 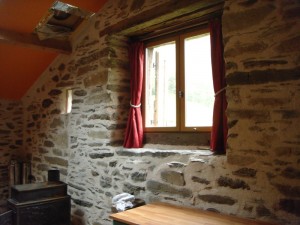 Next thing to do before lunch was to try and make the coffee table we had snaffled from Chamonix look presentable so we can use it. It just need a sand and a varnish from me and Al made 2 more slats to go beneath the main table to house magazines, books, games etc. 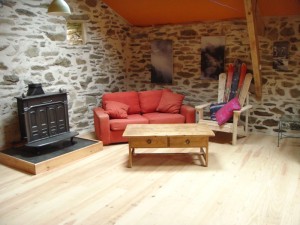 It really is spring weather at the moment, all seasons in one day and the sun was kind enough to show it’s head again for us to have lunch in the sun, which was a bonus.

Something had decided to eat the mesh in the window frame in the outbuilding which we needed to replace before the bugs arrive with the warm weather!!! We managed just to get this done in time before the rain began again and back to indoor jobs.

One thing we have been putting off was a good clean of the outbuilding but we now have a hoover which works with the generator so while the generator was working we attacked it for a complete spring clean, not much fun but much cleaner and better to live in.

Final jobs for the day were to blacken the stove again as the water had come through the chimney opening over the winter. A messy job but well worth doing. Al made some hanging space downstairs for baskets and veg etc since the thing we were using before is now our curtain pole!!!!

Not a bad day. Al and I are both on a big detox after the winter and 2 weeks in the UK with lots of lovely food too much drink and the usual over indulging so healthy food and no booze till we head to Spain is the challenge. We had a lovely roast chicken, veggies and marmite spuds before watching an episode of Silent Witness which we are reallty enjoying.