Hans was having a day off to spend with Claire so we decided to do the same.

The forecast was for a dry day even if cloudy.

So after brekky in the sun, cats and washing we drove up to Rouze at 963m and started the steep climb and muddy climb up to the Col. Through some nice woodland and good climbing weather as not too hot. An hour and we were at the Col just out of cloud level but not hanging about weather. Some mysterious views with all the cloud hanging about.

We traversed across to Col des Portes where the route finding fun began. 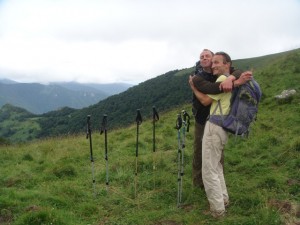 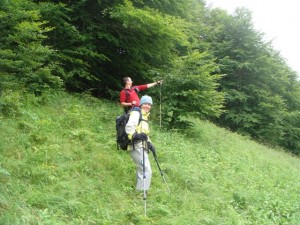 Managed a picnic on some dry rocks just above the stream and that was pretty much the last of the paths we saw until 10 minutes from the end!!!! All good fun, straight down through bilberries galore, then back into the woods which were not dense but just a tad slippy. We made it back with somewhat soaking feet but grins nonetheless. Glad we did not start that way round though.

Back to Vinnie and then hot indoor showers at Clives before well earned beers at the auberge.

Weather was warmish and dry so we opted for a BBQ while we could.

I made up some salads, Stevie in control on the BBQ and Al caught up on the blog. 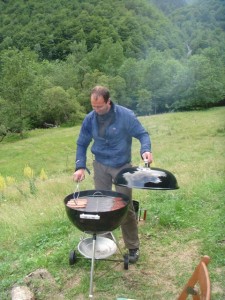 A lovely evening with bangers, burgers, cous cous salad and other salads too. A bit more of the plum tart for pudd. Sat around the brasier for a bit before we all headed to bed hoping for a good night’s kip….

2am the wind was really howling and a large knock on the door. Stevie was being blown away in the tent. So everyone up, rescued the kit and got the tent down and Stevie moved into the barn.

Hopefully the solar panels have survived as they took a tumble, they look alright but we will see in the morning.

Back to bed for a few more hours.