Charlie & Becks were due for about lunchtime so the morning was taken up with odd jobs and preparation. I shifted the sand left over from the window openings round the back of the barn with the Mucktruck; bringing back logs to fill up the log store outside the outbuilding. Once the sand was clear we both set about filling a couple of car tyres with compost in the veggie garden in preparation for planting next season. Breezy sorted out bedding and towels for our guests and generally cleaned up.

All the swelling on my leg has now disappeared from the wasp sting though it still itches a little.

Before preparing food we managed to get in a quick forage for brambles.

Charlie & Becks arrived on foot up the piste with a small rucksack each. They were starving having got an early flight with Ryan Air and driven over from Carcassonne.

It was warn enough to have lunch on the terrace. Salad with pate & cheeses washed down with rose wine. Charlie had bought fresh bread. 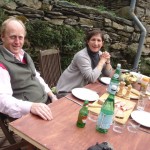 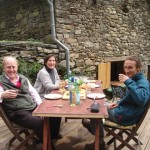 In the afternoon we took a short walk around the estate before scaling the platform in the trees. The gap in the boards is not especially large but the bottle of fizz was enough to coax Charlie to squeeze himself through. 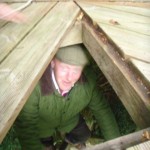 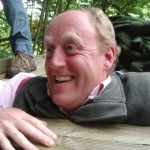 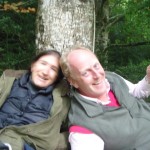 As we came down from the trees a little rain started to fall so the paella burner was set up just outside the outhouse door and the log burner lit for the evening. 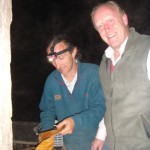