I waved Al off first thing as he had a RDV with some potential work people north of Toulouse.

I set too with a couple of hours of sorting out internet for Chamonix. I then had a wander down river for some mushrooms with some success so that was good.

The sun came out and I was determined to shift all the ballast up to the back of the barn, 2 hours later it was done and I was fairly knackered!!!

Huge bramble hunt to make Al a tart which he loves. Then finally dug up the beetroot which has grown really well and I will cook that tonight. First time for everything, never cooked it before but seems very simple. 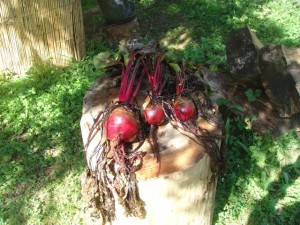 I had a late lunch just a little cheese as I was not very hungry.

Then I set too shifting all the trees we had felled up the hill ready to chop for next years firewood. More up and down the hill but another tick off the list.

Managed to get soem much needed scrubbing done in the outbuilding as well  floors, cupboards, shelves and the cooker! Even managed to oil the oven door so the dreadful squeaky door is no more!!!

I decided to have another forage in the afternoon and have found a new spot where we seem to have a good supply of bolets. Hopefully we will get enough to make a wild mushroom risotto before we leave. So have sliced them and they are drying above the wood burner.

Hot shower and chicken salad for supper. Seems odd without Al here but have had a good day getting lots of little bits and pieces done.

On to internet bookings again for Ski Breezy and best stay awake until Al gets back!!!